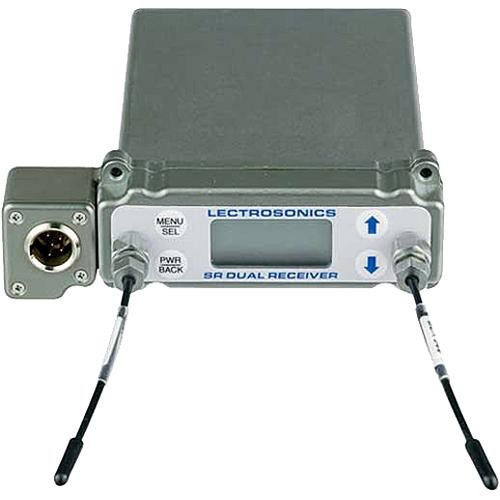 The receiver itself features two independent digital hybrid wireless UHF receivers in a single lightweight body. The SRb5P provides an additional audio output next to the front panel for use with cameras that have only one audio input in the mounting slot. One channel can feed the connector in the camera slot, and the second channel can be connected to the external audio jack on the camera with a cable. An optional accessory enables you to power the SRb5P Receiver with L and M type rechargeable batteries. With a pair of Lectrosonics transmitters, the SRb5P makes for a formidable wireless solution for the discerning production professional who needs to reliably capture broadcast ready audio.

What makes the SRb5P version different than the SRb is that the SRb5P is intended for use with cameras that do not have both audio channels enabled in the camera slot. So, in addition to the SRb’s audio outputs on the rear panel, the SRb5P also features a second set of outputs that are provided through a 5-pin connector on an adapter next to the control panel. This provides audio output from both channels in addition to the camera slot outputs.

Other features include SmartSquelch for noiseless muting and a built-in spectrum analyzer scans across the tuning range of the receiver to locate RF signals in the vicinity find clear operating frequencies. The two internal receivers can be operated separately, each using switching, antenna combining diversity, or in tandem with ratio diversity reception. Clear frequencies are easily found with the built-in RF spectrum scanner and graphical LCD. The audio outputs of the receivers can be mixed internally, or left separated for discrete recording tracks or external mixing.

Digital Hybrid Wireless is a design that combines digital audio with an analog FM radio link to provide both high audio quality and noise-free RF performance. Using a patented algorithm to encode 24-bit digital audio information in the transmitter into an analog format, the encoded signal is then transmitted over an analog FM wireless link. At the receiver, the signal is then decoded to restore the original digital audio. This process eliminates compandor artifacts and produces an audio frequency response flat to 20 kHz.

The SRb5P is intended for use with cameras that do not have both audio channels enabled in the camera slot. So, in addition to the standard SRb’s audio outputs on the rear panel, the SRb5P also features a second set of outputs that are provided through a 5-pin connector on an adapter next to the control panel. This provides audio output from both channels in addition to the camera slot outputs.

Each antenna signal is first passed through a high quality SAW filter to reject high power RF signals above and below the operating frequency. A high current amplifier follows the SAW filters and passes the signal to an internal splitter so that both antenna signals are available to both receivers for SmartDiversity reception.

The wide dynamic range of digital hybrid technology with a flat response to 20 kHz makes it possible to hear the -120 dBV noise floor in the mic preamp, or the (usually) greater noise from the microphone itself. To put this in perspective, the noise generated by the recommended 4k bias resistor of many electret lavaliere mics is -119 dBV and the noise level of the microphone’s electronics is even higher. In order to reduce this noise a Smart Noise Reduction algorithm is used to remove hiss without sacrificing audio high frequency response. The SmartNR algorithm preserves the transparency of the audio signal. Plus, desired high frequency signals are not affected. The SmartNR algorithm has three modes, selectable from a user setup screen. The optimal setting for each application is subjective and selected while simply listening.

The first IF stage at 244 MHz employs two state-of-the-art SAW (surface acoustic wave) filters that increase depth of filtering while preserving sharp skirts, constant group delay and wide bandwidth. This type of filter allows early primary filtering at a high frequency, before high gain is applied, to deliver maximum image rejection. The filters are made of quartz as well, which makes them very temperature stable.

After the SAW filter, the 244 MHz IF signal is converted to 250 kHz in receiver 1 and 350 kHz in receiver 2. Only then is the majority of the gain applied, just before the signal is converted to audio. Although these IF frequencies are unconventional in a wide deviation (±75 kHz) system, they offer outstanding AM rejection over a wide range of signal strengths and they support noise improvement at low signal strengths.

The SRb5P Series receivers use a simple, yet effective digital pulse detector to demodulate the FM signal rather than a conventional quadrature detector. This eliminates thermal drift, improves AM rejection and provides very low audio distortion.

In addition to SmartNR, all hybrid receivers are equipped with a supersonic noise-based dynamic filter and squelch system. The incoming audio is monitored for energy above 22 kHz, pilot tone excepted. Excessive high frequency energy indicates that the received signal is too weak to achieve an acceptable signal-to-noise ratio. Under marginal conditions, a variable low pass filter is rolled in dynamically, masking the noise while preserving as much of the transmitted signal as possible. When the channel is too noisy even for the filter, the audio is squelched. Plus, unlike analog squelching, this noise-based system requires no calibration and there is no better way to track the signal-to-noise ratio than to measure it directly.

The SRb5P Series receivers are designed to remove distracting noise without the squelching action itself becoming a distraction. They use a technique that waits for a word or syllable to be completed before squelching. Another technique incorporates recent squelching history and recent signal strength, adjusting squelching behavior dynamically for the most serviceable result under variable conditions. Using these and other techniques, the receivers can deliver acceptable audio quality from otherwise unusable signals.

The Talkback function provides a second audio channel separate from the main audio channel to allow the user to communicate with staff and crew. When the button on the housing is pressed, the audio output on the receiver is switched to a different output jack. When the button is released, the audio output returns to the main output jack on the receiver.

The firmware “remembers” whether it was turned on or off when power is disconnected and returns to that state when power is restored. 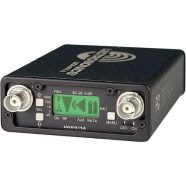 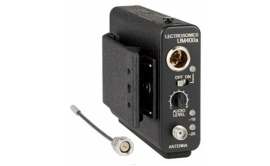 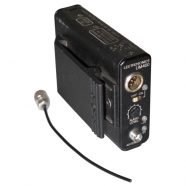 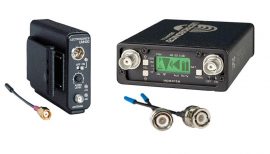