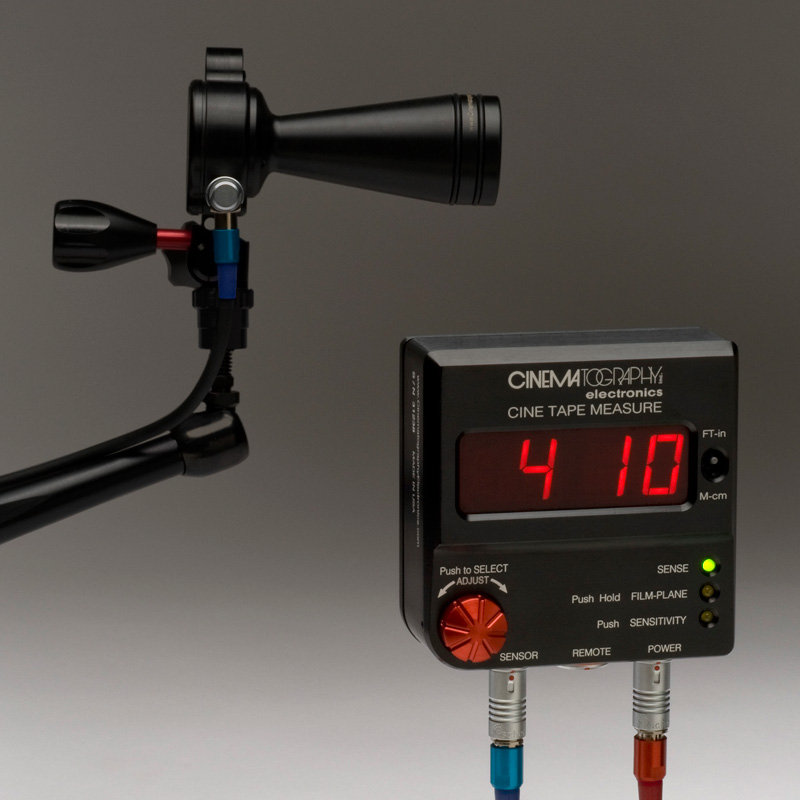 Measuring distance just became easier with the Cinematography Electronics CINE TAPE MEASURE System. This versatile ultrasonic system continuously calculates the distance between a subject and the camera’s film-plane. By continuously measuring distance during a shot, small or subtle subject movements are no longer a problem. With non-stop measurements, focusing a camera lens is simplified which saves time, avoids retakes and reduces production costs.

As an official reseller, we’re very excited to carry the Cine Tape Measure System and give high-end productions and camera professionals access to the requisite camera tools for outstanding control over focus. Whether you are shooting on the ARRI Amira, Alexa, Panasonic Varicam or Sony F5/F55, the Cine Tape Measure System allows your 1st AC to precisely monitor the distance between the subject they are focusing for an the image plane of the camera. The bright LED display can be set to show distance in either Feet and Inches, or Meters – Centimeters.

Best suited for larger budget productions and those requiring absolute precise control over focus and images, the Cine Tape Measure System is the perfect tool for the job, giving DP’s and AC’s piece of mind and allowing them to focus on getting the job done.

The main components of the system are the CINE TAPE MEASURE CONTROL and the SENSOR ASSEMBLY. The control displays accurate distance measurements from the constant stream of data that is received by the sensors.

CINE TAPE MEASURE System is a small, rugged, lightweight, and quiet ultrasonic range finder. It is compatible with all lenses, film cameras and video cameras. In addition, our system is easy to set up and use, making it the first choice of professional filmmakers.

The stylish Cinematography Electronics CINE TAPE MEASURE CONTROL is the brain of the system. It continuously computes the distance between the camera’s film plane and the subject. A simple one-time Film-Plane offset adjustment programs the relationship of the film plane to the sensor position. When the control detects a subject, the green Sense LED glows and the calculated distance is shown on the LED display in either feet-inches or meters-centimeters. Adjustable brightness levels for the large red LED display offers comfortable viewing under different lighting conditions. The digital Sensitivity adjustment feature fine-tunes the system range, which is also helpful with different subject reflectivity. The Close Focus feature sets the minimum sense distance. Objects within this area are disregarded. All of the functions are set and stored digitally, which safeguards against accidental changes and provides accurate repeatability between units.

The innovative Cinematography Electronics SENSOR ASSEMBLY consists of two small cone-shaped “horns,” a miniature pan tilt mechanism, a mounting stud, and an electrical connector. The horns send and receive ultrasonic signals that are used to calculate the distance measurement. Mounting the SENSOR ASSEMBLY onto a camera package is simple with the combo stud. With its pan and tilt adjust/lock knobs, aiming the horns towards the subject is quick and straightforward. The SENSOR ASSEMBLY interfaces to the control via a short detachable Sensor Cable. A spring-loaded holder permits laser pens to be attached parallel to the sensors, providing a visual reference during calibration.

The Cinematography Electronics REMOTE CONTROLLER, used in conjunction with a CINE TAPE MEASURE, provides a second distance display and two adjustable near-far distance limits, with displays. The REMOTE CONTROLLER’S stylish enclosure also duplicates all the control functions of the CINE TAPE making it simple to make adjustments from either unit. It also adds a SYNC function for use when two CINE TAPES are on the set. Click here for more information.